TPC trial to give voice to residents hurt by blast

TPC trial to give voice to residents hurt by blast 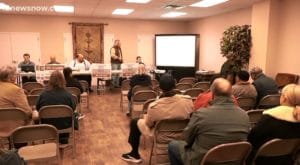 Like most folks in Port Neches in the early morning of Nov. 27, 2019, Walter Holt was asleep when the explosion at the TPC Group plant shook him from his bed.

The ignited vapor cloud and resulting fires were enough to shake up most people who lived as close to the plant as Holt. But he alleges that said the event had a lingering impact on his life due to the post-traumatic stress disorder he lives with due to earlier experiences with the U.S. Marine Corps.

The blast not only jolted Holt from his bed, it also triggered a full PTSD episode. The panic and resulting stress greatly affected his life afterward.

“At the time, I was a nursing student at Lamar State College Port Arthur and a straight-A student,” he told The Enterprise. “I was able to accommodate my classes because PTSD is a wave; if you can just direct your boat in the right direction you can ride it out.

“After this, my boat turned into a kayak.”

Holt’s story will be one of many that will be examined in the coming civil trial against TPC Group that will kick off sometime after Monday, when lawyers from the company and representatives of the plaintiffs will meet with state District Judge Courtney Arkeen in Orange County for the first time.

Monday’s administrative conference is designed to hammer out a schedule for the coming proceedings in the weeks and perhaps months ahead.

The case was moved to Arkeen’s 128th District Court in late June after months of deliberation from a multidistrict litigation court searching for the best venue for the parties involved. Lawyers representing TPC filed a motion in January claiming the cases against their client were burdensome because some initial cases were originally filed in Harris County.

The scheduling conference was originally set for Aug. 24, but the Orange County Courthouse was closed for several weeks following Hurricane Laura.

TPC began demolition of some of its “compromised” equipment at the Port Neches site in August, but exhibits and evidence were collected before the court order on the site was released.

Representatives from TPC Group declined comment for this story.

Plaintiffs in the case will be represented by local firms like Brent Coon and Associates and The Ferguson Law Firm, but some have also secured representation from firms in Houston and elsewhere.

“We are 10 months in without our first hearing yet,” said Coon, who has represented plaintiffs in previous industrial disasters like the BP Texas City refinery explosion. “But, hopefully after Monday, we can proceed forward.”

The lawyers representing people affected by the event have criticized the company’s safety and emissions records leading up to the incident. They hosted meetings in Port Neches to answer questions from residents who have been trying to work with the company to fix their property damage.

In late May, the company was handed an initial fine of $514,692 from the U.S. Occupational Health and Safety Administration for three willful violations connected to the blast.

Coon said the penalties are some of the highest that the federal agency can levy, but are still not enough to ensure companies act responsibly in the future.

There were no fatalities in the TPC explosion, but three people were reported injured after the initial blast.

A civil case requires a higher level of proof for a judge to declare a company was responsible for emotional or physical damage to someone’s health.

Holt, the Marine veteran from Port Neches, said he is willing to try.

Since the blast, he has returned to school, this time to study process engineering. As a part of his therapy, Holt has decided to turn the triggering thoughts of anticipating the next blast into a drive to understand the industry and hopefully make it better from the inside.

He said there’s more at stake for him personally than any potential monetary award.

“There needs to be a message that there are consequences for making stupid decisions,” he said. “I’m hoping by telling my story, it will be interpreted by people that they can get the help they need.”

Is My Texas Personal Injury Severe Enough for a Lawsuit?

A Texas personal injury is a common statement for people meeting accidents on their ways. Well, accidents are not bound to happen due to road or traffic incidents; they might even occur at workplaces, and they might occur while tripping on something. There are many ways through which a person can get involved in such cases…

A teenager died in a rollover crash on NAS Drive on Monday, November 29, the Corpus Christi Police Department (CCPD) informed. The vehicle was being driven by a 64-year-old. The victim has been identified as 18-year-old Isabella Trevino.  As per CCPD lieutenant Colby Burris, the incident occurred near Webb Street on NAS Drive a little…

The leak of deadly Hydrogen Sulfide gas and other dangerous chemicals at the Nederland Tank Wash resulted in vapor pouring into the atmosphere and flooding the neighborhoods with noxious and toxic fumes for almost a week now. Locals were eventually advised to either evacuate or shelter in place to reduce exposure risks. Local attorney Brent…