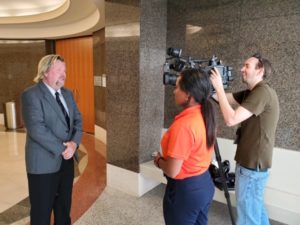 Were you affected by the Deer Park ITC fire or the KMCO explosion?

Harris County District Judge Daryl Moore will entertain the emergency temporary restraining order Friday, April 5 at  2:30pm in  the 333rd District Court.  Brent Coon and Associates law firm filed a request this week seeking a temporary restraining order (TRO) against KMCO. LLC on behalf of one of the workers injured in the tragic explosion and fire at the KMCO plant in Crosby, Texas.  The injured worker, Arturo Martinez, was working for contractor Brand Insulation and was on the job adjacent to the location of the explosion at the time it occurred.

The TRO and petition were filed jointly in Harris County District Court late Tuesday, and seeks a restraining order against KMCO from damaging or destroying any evidence of the incident and to preserve the scene for investigative purposes.

The KMCO plant located in Crosby, Texas is no stranger to disasters and to governmental scrutiny of their operations.

“We are pleased to see the Texas Attorney General’s office act swiftly to engage the Texas Commission on Environmental Quality (TCEQ) to file suit against KMCO  LLC as owner of the plant. Many thousands of pounds of toxic chemicals have been emitted to the local atmosphere from this incident, and more importantly lives have been lost and others irreparably harmed as a result of what is always an avoidable occurrence in a business sector infamously known for cutting corners and dealing with the aftermath as a consequence,” said lead attorney Brent Coon, founder of Brent Coon and Associates.

“What we already know at this early date on the fire and many of the otherwise avoidable injuries is frankly shocking.  We know that the plant allowed a volatile chemical leak in a line to catch fire near a giant tank of flammable gas materials. We know that there were very poor instructions in dealing with potential for a fire and explosion and evacuation protocols. We know that the alarm system was either ineffective or non-existent, resulting in verbal commands from nearby workers to make a run for it before the explosion.  And we know that muster points were improperly utilized and the other exit gates were actually locked, trapping workers trying to flee.  Mr. Martinez apparently sustained additional injuries after the explosion trying to climb under the locked gates and hurting his back.  We want to make sure that ALL evidence is preserved, including evidence related to prior criminal charges and fines assessed against the plant, the history of process safety management practices, shutdown and turnaround operations, design and operation specifications, inspections, communications, and any audio or video related to the incident.  Often key parts of this information disappear during the investigative and discovery process due to ‘retention policies’ set by the companies that deliberately destroy information to could be relevant to the case.  A comprehensive restraining order reducing the likelihood of that occurrence,” added Coon.

Texas regulators and politicians have a history of turning a blind eye to the operations of this lucrative business sector, but at the cost of damaging the environment adjacent residential neighborhoods and constantly killing  and maiming their workforce.  “As these plants continue to get older and older, and operate with less preventive maintenance and oversight, you will continue to see more and more of these types of scenarios,” says attorney Bob Schwartz of the Coon firm.  Mr. Martinez and many others injured in this incident are obviously very upset.  Schwartz met with Mr. Martinez who told him it was absolutely terrifying and that when they literally ran for their lives to an exit gate, they found it locked with barb wire across the top.  “We were trapped and everyone panicked.  It was complete chaos. We had to try and squeeze under the gate to escape and I didn’t think I would make it out of there alive,” said Arturo Martinez.

“KMCO is a Texas corporation, and has utilized the full benefits of a rather lax regulatory environment to enhance profit margins at the risk of the safety and health of the workforce and those who live near their operations.  Past fines by our state and federal regulatory bodies have been inconsequential to the bottom line and failed to impact their decision-making.  In fact, they were criminally convicted only a couple years ago of serious violations of environmental laws  and had a bad fire and explosion at their sister plant in Port Arthur.  Numerous other fines have come from prior bad acts and from the TCEQ and the U.S. OSHA on dozens of worker health and safety violations. Something needs to change.  One of the few highly competent governmental investigatory agencies created solely for this type of incident, The U.S. Chemical Safety and Hazard Investigation Board (CSB), has announced they will conduct a thorough root cause analysis of the explosion. We have worked with the CSB in numerous other area disasters, including the fatality incidents at Dupont La Porte and the BP refinery explosion in Texas City, as well as others nationally, and welcome their team to this case.  What we want to know sooner rather than later is obviously WHY this happened, but also why there was such poor preparation and training for such disasters and WHY critical exit areas were gated and locked.  This could have been a lot worse if additional  tanks and lines caught fire as in Deer Park, particularly if people were having a lot of difficultly getting out of the zone of danger due to the poor alarm systems and locked exits,” said Coon.

Something does indeed need to change, and it shouldn’t just be the body count.