In the aftermath of the terrible outbreak of violence that occurred at the Twin Peaks in Waco Texas, there is an increasing tide of confusion, misinformation, and obfuscation. And the number of          unanswered questions continues to increase even now.

We understand from the police statements that the initial meeting of bikers at the Twin Peaks was a conference to discuss territorial disputes between rival outlaw gangs.  But, this is not true. The conference was a regularly scheduled meeting organized by the Texas Confederation of Clubs & Independents to discuss current legislation that affects biker safety and rights. This meeting has occurred regularly every couple of months for many years in communities around the state without there ever being any prior incidents of notable violence.​

“Welcome to our biking community website. We hope you find this site useful and informative. 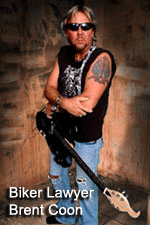 I don’t consider myself a typical lawyer. I wear jeans and ride a bike to work when not in Court. So do some of our lawyers. We are the biggest and best biker friendly law firm in theCountry.​

​Sadly, most other lawyers, judges, jurors and others don’t even understand the biking community and what it is all about. It is their loss but regardless, it leaves many of them questioning our values, integrity, and morality. Understanding that ignorance and confronting it properly is an important part of legal representation. We do it best because we understand it best. If you need a lawyer, you need to call us. Consultations are free to our brothers and sisters in the biking community. The other thing we ALL need to do is get more involved in the issues important to our lifestyles. From illegal profiling, to safety issues to helmet laws. Help support the cause of protecting what we all share, the freedom of riding a bike.”

The Signal that Triggered The Waco Shooting?

The leaked video from the Don Carlos parking lot capturing a small piece of the conflict in Waco may not show us exactly what transpired on May 17th, but it very well may reveal the key witness and what triggered the shooting.   The man in the blue shirt must be identified.
​

Have You Recently Had A Bike Accident or Other Legal Problem?  Why You Should Hire BCA.

Brent Coon and Associates is experienced in many areas of personal injury including Motorcycle Accidents. Founder Brent Coon, while probably best known for his work against corporate greed including the Texas City Explosion and the Gulf Coast Disaster, is an avid motorcycle rider. Brent Coon is a recipient of the Steven Sharp “Trial Lawyer of the Year Award” from the AAJ and the Clarence Darrow Award, a finalist as lawyer of the year with Trial Lawyers for Public Justice, an ALM Top 100 Plaintiff Lawyers in the Country, a founding member of The National Trial Lawyers Association, a Fortune 500 “Top 100 Go To Attorneys” along with numerous other accolades. And as an avid motorcyclist, Brent Coon understands bikes, bikers and the complexities of motorcycle injury lawsuits and litigation.

As motorcycle accidents often result in serious injury or fatalities, we understand the stress an accident puts on both the injured and loved ones. With the worries of increased medical bills, recovering from injury, returning to your occupation, BCA understands the pressures that result from motorcycle accident. Our motorcycle lawyers will work with you hand in hand and provide constant communications on your motorcycle lawsuit.

Then, in the aftermath of the incident, after 9 were killed, 20 were injured, and over 175 people were arrested, further questions started to surface.

We understand that some of these questions will take some time to answer. But many of them can and should be answered immediately. When violent incidents have broken out in the past that question excessive use of force, such as in Ferguson, New York, and LA, people put law enforcement to task. And we would expect the same kind of scrutiny here. The fact that it potentially involves a law enforcement negative stereotype of a minority is no different than their stereotype of a biker.

Furthermore, we feel that there has been a purposefully inaccurate portrayal of all the details that surround the incident in Waco by spokespersons with law enforcement and we want to help clarify the stories to assist both those involved as well as the general public in understanding what happened, why it happened, and what the ramifications could entail. Most of the people that were sucked into this incident and arrested on million-dollar bonds are law abiding citizens. No history of illegal activities. No possession of illegal weapons or drugs, and NO evidence of involvement in any criminal activities prior to or on the date of the incident. Moreover, once order was restored to the Twin Peaks premises and the dust settled, there were no subsequent riots, no looting, no violent repercussions. The majority of these people who traveled to Waco to attend a call legislative assembly meeting of bike clubs respect the law, the community, and society. A large number of the people in the motorcycle and biking community are police officers, fire fighters, and veterans. Many other clubs are founded for the express and limited purpose of charitable work, assisting abused children, or other acts of kindness and compassion. These are people who are very patriotic and who have faith in the system and the way it works.

If this story had involved the Bloods and the Crips meeting at a nightclub in LA, would this police behavior be viewed as appropriate? Would it be acceptable to have police wait with snipers, open fire, and shoot at everyone in the nightclub just because they were black and fit a stereotype by law enforcement? Surely all black people who go to late night nightclubs to hear a rapper or hip-hop DJ are criminals. Would it be appropriate to then file unsupportable and unfounded criminal charges against every other person at the club just because they were black? Wouldn’t there be a public outcry of foul behavior? Wouldn’t there be a flock of public advocates descending upon the scene demanding transparency and justice? Wouldn’t the press be all over the place following every story and every lead? Wouldn’t there be people demanding due process and outside investigations? What is different here? No race card?

As this story has made its way through the public, so far, we have only gotten one side – that of the Waco Police. We intend to help correct that imbalance and help present the stories of all the innocent people who were caught up in this maelstrom. And, in the end, hopefully rationality and sanity will be restored to Waco.

This biker incident is unfortunate for Waco. It has produced more bad press for a town that has already lagged behind. Waco doesn’t need to be famous for another mass killing.

A situation in which apparently innocent bystanders who don’t even own motorcycles, are not in any club and have no criminal history were swept up in mass arrests and their personal property seized doesn’t sit well with people who value their own freedom and possessions. The McLennan County Jail is a private for-profit business, leaving Waco ripe for criticism that people are being held there on million-dollar bonds as more of a money-making scheme for the jail than a pursuit of justice.

Allegations that the corporation that runs the jail has made contributions to the McLennan County district attorney open him up for ethical questions about his decision to set unreasonable bail amounts. Now the lawsuits against Waco have begun. This is likely going to drag on for years, during which the only stories the nation will hear about Waco are bad ones.

I have heard 18 police officers were pre-positioned with sniper equipment at Twin Peaks prior to any shots being fired. But they were all hidden, in tactical gear, with no marked cruisers in the Twin Peaks parking lot or mall parking lot or adjacent highway. Likely just one marked police vehicle with lights going would have prevented trouble, as no fight would have started in front of an obvious police presence. Sadly, the police chose to have no visible presence.

Even 18 police officers can’t break up a fight from 50 yards away; they can just send bullets into the fray, which is apparently what they did. That is what the military does, but it is not what police are supposed to do.

So we have a town that has abandoned community law enforcement in favor of military-assault vehicles and sniper weapons; private for-profit jails hungry for prisoners; and possibly corrupt officials. This is not a formula for growth.

​It’s time for Central Texas citizens to ask questions regarding the May 17 incident at Twin Peaks. Who was actually shooting who? Was this a setup and by what organization? And why was everyone’s bond set at $1 million? Do we really believe everyone arrested is guilty and should still be held in jail? Why is it OK for all vehicles to be confiscated, or why are these still being held?

As citizens, we are not blind or foolish. We know there are some dangerous people out there. We also know that what police and the news media tell us is not the complete truth. We as citizens here in Central Texas are entitled to the truth. Citizens who did not commit a crime such as murder should not be held in jail till District Attorney Abel Reyna or others simply decide they are of no advantage.

We live in the United States of America. One of our most cherished principles and rights remains this: One is innocent till proven guilty.